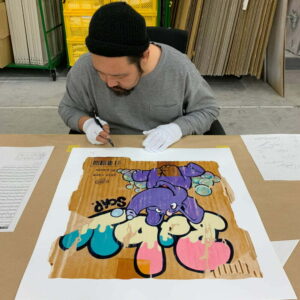 TENGAone (b. 1977) is a street artist based in Tokyo. His alias derives from the notion of “Ga ga Tenshoku (TenGa)”, which translates to “Art is My Calling.”

TENGAone grew up in a neighborhood near an American military base where he frequently encountered American-style graffiti such as tags and throw-ups done by the personnel who had brought their home country’s art movement over to Japan. This firsthand exposure to graffiti culture had a profound effect on the artist, and at the age of 14 he began creating his own graffiti using spray paint. In 2007, after having worked as a graphic designer and a web design professional for several years, he began his official career as an artist. His practice encompasses a wide range of genres including street graffiti and murals on commercial and public facilities, as well as sculpture and graphic design. His artworks have also been exhibited at contemporary galleries and art fairs.

In May 2018, he exhibited a collaborative piece with Takashi Murakami, MADSAKI, Snipe1, and ONEZKER at Beyond The Streets in Los Angeles. (Source: Kaikai Kiki)